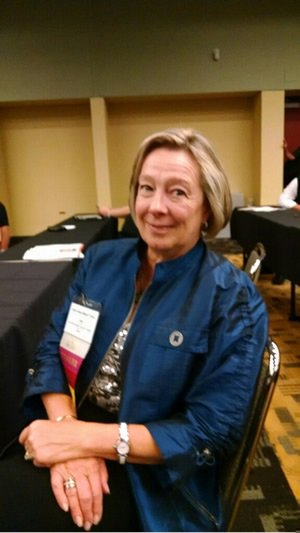 When introducing Pero, Rohlfing praised her for her years of service. She has been with Mygrant for the last 13 years and in the industry for 41 years.

“This year’s honoree has worked tirelessly for the AGSC for more than a decade,” he said. “Not only does she dedicate her time and energy to chairing the AGSC’s Accreditation Committee, which oversees our strenuous third-party validation program, but she also has chaired the AGSC Silent Auction since its inception. She is single handedly responsible for dozens of newly registered companies each year.”

“[J]ean has been an integral part of the Auto Glass Safety Council since she first became involved with the group and it is most fitting that this year’s Carl F. Tompkins Award for Industry Service is being bestowed upon her,” he added.

“It doesn’t seem fair to get an award for something I love,” said Pero when accepting the award.

Rohlfing then honored King for the more than 17 years he has spent with Sika. King is retiring this month.

“Prior to working for Sika, John was a heavy truck sales manager and automotive aftermarket regional manager with Federal Mogul Corp. in Southfield, Mich. He has seen it all, as he also has experience as a school teacher, basketball coach and insurance agent,” said Rohlfing.

“John joined Sika in 1997 and has shown his commitment to safe windshield installations throughout the last nearly 20 years with the company. He has constantly served as a resource for the industry and for the advancement of safety,” he added. “When John isn’t working hard for the auto glass industry’s future, he enjoys playing golf. John, you will be greatly missed when you retire later this year.”

“This is a great industry because of the people … All I have done is steer the stage coach,” said King when accepting the award. “We have some great minds who pull it.”