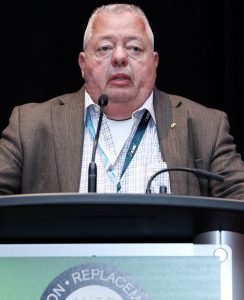 Today, Bud Oliver received the award and joined an illustrious list of individuals who have helped professionalize and advance a growing industry.

Mike Schenian, president of City Auto Glass in South St Paul, Minn., and the president of the Auto Glass Safety Council, presented the award to Oliver during day one of the 11th Annual Auto Glass Week™.

Oliver received nominations from numerous industry peers and impressed the selection committee with his commitment to the auto glass repair and replacement industry.

Oliver joined Mitchell International, which owns National Auto Glass Specifications (NAGS), in 1989 and spent 31 years at the company. As the director of product operations, he worked extensively for NAGS until his departure. He began working as a project manager at Omega EDI in June 2020.

Oliver landed on AGRR magazine’s list of the industry’s most influential individuals in 2013, which he cites as one of his proudest moments. He grew up in Salt Lake City, Utah, and joined the United States Marine Corps after graduating from high school. He served from 1975 to 1979, earning the rank of corporal.

“I came from a Navy family,” Oliver says. “My dad was of that age group where he was in World War II, Korea and Vietnam. He’d take me to the Navy base, and the Marines were at the gate. When you’re five years old, and you see those Marine Corps uniforms—I wanted to be one of those guys.”

Bud’s wife DJ spoke about their life together, capturing the essence of how the industry feels about her husband.

“He would hear our complaints and never make up excuses,” Beranek says. “He would always hear what we said and reply, ‘Well, I’ll get back to you,’ and he always did. He always followed up and did what he said he was going to do.”

As a condition of membership, I agree to follow the guidelines listed above on the usage of the AGSC Automotive Casualty Insurance Company Member logo. I do not agree with the guidelines listed above and decline usage of the logos.
Manage Cookie Consent
To provide the best experiences, we use technologies like cookies to store and/or access device information. Consenting to these technologies will allow us to process data such as browsing behavior or unique IDs on this site. Not consenting or withdrawing consent, may adversely affect certain features and functions.
Manage options Manage services Manage vendors Read more about these purposes
View preferences
{title} {title} {title}