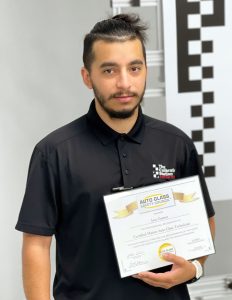 In 2016, Gomez began his career in the auto glass industry and has been working for Don’s Mobile Glass ever since. According to Jacques Navant, Technical Director at Don’s Mobile Glass, “Jose is a key member of our team and one of the driving forces behind our company culture.”

Gomez enjoys going to local car organizations and seeing the different artistic styles through which people build their cars. He also enjoys working on cars in his free time.

He is thankful for his brother, Junior Gonzalez, and his cousin, Abraham and the fact that they like cars as much as he does. He is also grateful to Richard Rodriguez for always being there for him.

This entry was posted in News. Bookmark the permalink.