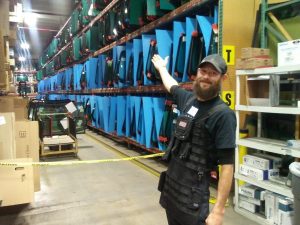 He has been in the industry for nearly eight years. “I was previously working for a hotel chain for four years,” recalls Payne. “I started as a janitor and worked my way up to a general manager. I quickly realized I needed to do something different due to income.”

He adds, “I saw a job opening at a local, family-owned glass shop, so after some research into the field I decided to take the risk of entering a new field with an entry-level position and I’m glad I did.

“After seven years of employment with that glass shop, the owner became my mentor. I listened to his stories of auto glass in the past and how things have changed in the industry. He taught me many things [and] one in particular: the American dream is alive and well.”

In 2016, Payne says he convinced the owner to allow him to go to Auto Glass Week™ in San Antonio. “By doing so, I unleashed a whole world of industry-related information, training, education and networking with other glass shop techs and owners,” he says. “I felt like I had found a career home. I was hooked.”

About a year and a half later Payne decided to start his own shop. “By doing so, within five months I became a Registered Member of the AGSC, upgraded my pre-existing qualified technician certification to a Master Technician, [and] became a Riverton Chamber of Commerce member.

Payne says his Master certification “is [his] proof of knowledge and [his] commitment to consumer/technician safety.” “My goal is to take this respected title and educate consumers and technicians alike on the safe and proper methods of auto glass installations,” he adds.

In Payne’s spare time, he enjoys spending time with his three-year-old daughter and 13-year-old son. He adds, “My wife and I are also avid outdoors people and enjoy hunting, fishing, hiking and 4x4s.”