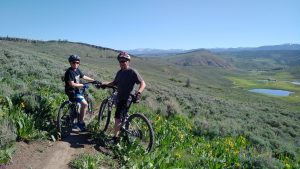 Dan Osborne of All Cracked Up in Tabernash, Colo., recently renewed his Master Auto Glass certification with the Auto Glass Safety Council™ (AGSC).

Osborne has been in the industry since 1991. “I had a bike shop where we also took riders on mountain bike tours. We paid our bills but not ourselves, so we all worked at night,” he says. “One weekend it was my turn to lead tours and a fellow came in and wanted a tour so I took him … I noticed he was riding a nicer bike than me, and he hired me to go on another ride the next day. He was on a different mountain bike [the next day], also nicer than my ride.”

He continues, “So I asked him, ‘what do you do for work?’  His reply was, ‘I’m in the auto glass business.’ I said to myself, ‘I can do that,’ and started the next week looking into doing repair only.”

The business grew quickly for Osborne. “Within six months I was looking into doing replacements due to the calls I was getting, but I subcontracted the installation work at first,” he says. “As I watched these guys come up from Denver, and the quality of work they were doing, again I said, ‘I can do that, and do a better job.’”

When it comes to certification, Osborne says, “My focus has always been to know my trade as a bike mechanic way back, and now as an auto glass tech, and into the future I am working on becoming very well educated and informed on the calibration side of things.”

In his spare time, Osborne enjoys the outdoors, including hunting, fishing, hiking, and mountain biking. “My employees know one thing: when it’s time to get things done, we go, but they hear me say every week, ‘I didn’t move here to work,’ and I make sure they live that out as well,” he says.