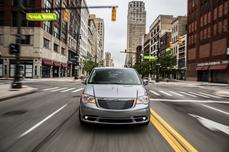 Chrysler is recalling certain model year 2015-2016 Chrysler Town and Country and 2014-2015 Dodge Grand Caravan vehicles due to a possible faulty windshield installation in the factory. According to the announcement from the National Highway Traffic Safety Administration (NHTSA), the windshields on the affected vehicles “may have been installed using expired urethane primer, allowing the windshield to become displaced in the event of a crash.”

“As such, these vehicles fail to comply with the requirements of Federal Motor Vehicle Safety Standard (FMVSS) number 212, ‘Windshield Mounting,'” writes the NHTSA in its report about the recall.

The affected vehicles were manufactured between August 16, 2014, and December 5, 2015. The company estimates that 184 vehicles are potentially affected by the recall. Chrysler reported the issue to NHTSA on January 26. The vehicles in question were assembled at the company’s Windsor, Ontario, plant.

The company began to investigate the issue on November 9, 2015, when two subject vehicles were tested for urethane cohesive bond using the “quick-knife” method. According to Chrysler’s notification to NHTSA, the first unit had 75 percent failure and the second unit had 16 percent failure.

According to NHTSA, Chrysler will notify owners, and dealers will replace the windshields, free of charge. The recall is expected to begin on March 4, 2016.

This entry was posted in Safety News and tagged Chrysler, primer, recall. Bookmark the permalink.