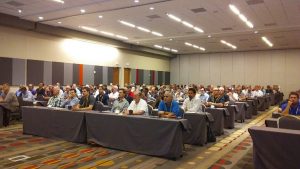 Bill George of NSG Pilkington North America led an informative session on a popular topic at the conference—Advanced Driver Assistance Systems (ADAS) and how to calibrate them.

“If AGRR companies are late to the table learning how to handle calibration of this complex technology, they will lose out to the dealership channel,” said George to a crowd of about 1,000.

“All of the new model designs are starting to incorporate this technology,” he continued. “The National Highway Traffic Safety Administration’s (NHTSA) deal with automakers on automatic braking shortened the cycle through which this change would normally happen. This is happening in an incredibly compressed time frame.”

AGRR companies first to the market offering calibration of the technology after a windshield replacement will set their path for success, he said.

“Early adopters will win,” he added. “And offering calibration is doable for AGRR companies.”

ADAS presents a big industry challenge. Each automaker is choosing a different path and incorporating different technology. It is not streamlined, George explained.

So what is ADAS? It is designed to keep the driver safer, according to George. It includes such technology as collision avoidance, surround view, lane-departure warning, cross traffic alert and park assist, along with other features.

The technology utilizes radar, lasers and cameras to feed information to the vehicle’s computer that allows the vehicle to react to potential hazards.

“One of the big pieces of this is the camera,” George said. “Some automakers incorporate a single camera and others have stereo cameras.”

“With emergency braking technology, the vehicle will understand what’s going on around you, understand your speed and stop the vehicle on your behalf,” he pointed out.

The relationship between the windshield and camera is important.

“The glass has a three-dimensional cross curvature. At the center line there is 12 to 13 mm of cross curve. If this isn’t exact, you are changing where camera is pointing,” George said. “You can end up out of specifications.”

The government and NHTSA have thrown their support behind this technology, which means the industry must prepare, he advised.

“When we started thinking about a solution, we knew this would be difficult,” George said. “But the glass has to be built right, the bracket for the camera has to be right, and it all has to be aligned properly for the technology to work properly.”

There are two types of calibration—static and dynamic. With dynamic, a technician can drive the vehicle a certain distance for a set period of time and it will self-calibrate, according to George. The vehicle will use the lines in the road, radar, lasers and camera to identify static objects in orientation to the vehicle.

“It will basically find out where the vehicle is in relation to where other things are,” George said. “You can’t do this in a blizzard or rain storm. You have to be running at certain speeds, different distances on certain roads. It takes two people to do it. One needs to run the calibration process and one needs to drive the car.”

Static calibration does not use static objects on the road to align itself.

“The car is sitting stationary and it needs to be level,” he explained. “You need to put some markers in front of it and focus the cameras and radars. I call this a fusion system—a combination of all these things working together.”

Currently, there is a mix of vehicles on the road that require static or dynamic calibration.

“My personal opinion is static will go up,” he noted. “You’ll be leaving the car out of alignment if you don’t realign. If you replace the windshield and don’t unplug the camera, the vehicle’s computer may think it’s aligned but it might not be. You don’t want to be the last person to have touched that vehicle if something like that happens and a crash happens.”

When it comes to glass, independent installers garner the business.

“What we don’t want is to have a channel shift,” said George. “If we can’t do the work where do you think this work will migrate to? The business could migrate to the dealership channel. We will lose if we are late to market. We cannot be late.” 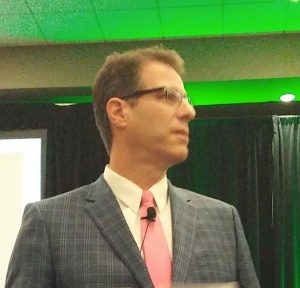 HSG CEO Wayne Sharrah offered some tips on what AGRR companies can do to avoid some of the pitfalls third-party claims administrators hear about from customers.

Wayne Sharrah, CEO of Insurance Claims Management, parent company to HSG/Code Blue, shared the insurance perspective and explained what AGRR companies can do to avoid some of the pitfalls third-party claims administrators hear about from customers.

Insurance companies pay out $43.5 billion a year to repair vehicles, according to Sharrah. Payments for glass claims make up a $2.5 to $3 billion piece of that pie.

“It’s a tremendous amount of claims,” he said. “There has been a 24-percent increase in insurance rates since 9/11. The cost of business and cost of glass has gone up. You guys need to help us understand what is going on in the AGRR industry. If you just learned something new [such as how to calibrate Advanced Driver Assistance Systems], you need to communicate this. Explain to insurers that you need to do these three things after the glass is installed. If this business is going to climb, they want to know.”

The glass industry represents a lot of buying power, Sharrah pointed out.

“I’ve been going to insurance companies to say we have to put reward guidelines back in for shops,” he said. “Based on cycle time, speed or repair rates, you should reward them [I tell the insurers].”

Insurance companies are thinking long-term. The industry needs to communicate with the companies about what is coming down the pipeline, he said. 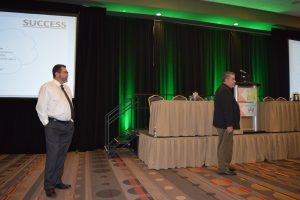 AGSC board member Troy Mason, founder and owner of TechnaGlass, and David Leach, chief operating officer for AGSC Registered Member Company Don’s Mobile Glass/Wardrobe and Bath Specialties, led a session titled “How to Succeed Without Size (Yet).” Though they each had their own story to tell in the hour-long session, their common theme was twofold: take care of your people and focus on the customer.

“Your culture is a by-product of your actions,” Mason said.  “Just take care of your customers.”

Part of that, he said, includes training your people—and picking the right ones to hire. Each of his technicians undergo a four-week training program and become certified before they are placed in a store.

“This isn’t on-the-job training,” he said. “By the time they get to a store, they’re able to contribute. Make sure your people share your passion and your vision. They are your brand.”

Leach agreed, and added this tip: “Be difficult to get a job with.” And when it comes to customers, “do the right thing—even when you don’t want to.”

Both spoke to the importance of branding. Mason said it was something he learned “accidentally 25 years ago,” but it was a lesson he’s never forgotten and stressed the importance of being willing to invest in your brand. Leach noted that his company, based in Modesto, Calif., is now the city’s second most-recognized brand.

Leach attributed his company’s success to a willingness to constantly look at the industry with fresh eyes and being willing to “shift the paradigm as often as necessary. Agility is your key to life.”

“If everything you do succeeds,” Leach said, “you’re not trying hard enough.”

Part of trying, he said, was making mistakes and being willing to take that dare.

Above all, Leach said, “Don’t encumber your business with unnecessary bureaucracy. Fight the urge to complicate things.”

Kelly McDonald of McDonald Marketing covered a wide range of topics in her presentation, “Crafting a Customer Experience for People Not Like You,” and broke down the vast customer market into a set of strategies designed to improve marketing for local business owners.

Pointing to demographic trends that indicate 7 percent of the American population, or 22 million people, is now defined as “multiracial,” she said America is less the melting pot of old, in which races and ethnicities blend into a single “American” identity. Instead, the country is like a salad bowl–a combination of discrete ingredients, each with its unique identity, all sharing the same space.

This perspective, McDonald said, requires a marketing approach that is savvy, focused and customized.

Diversity, she explained, means more than demographics. It means understanding people who “are not like you” – in several different ways, such as age/generation, physical abilities, rural/metro, among others.

“Understanding someone different from you means understanding their life,” McDonald said, pointing out that a person’s priorities, values and experiences are what defines that person’s perspective.

Successful marketing, she said, realizes these factors and is built around a set of strategies designed to touch all possible customers, regardless of their “differences.”

Finally, McDonald said, a customer’s “perspective is never wrong. It can’t be. It’s how they see the world.”

Stay tuned to www.agsc.org for information about next year’s Auto Glass Week™.