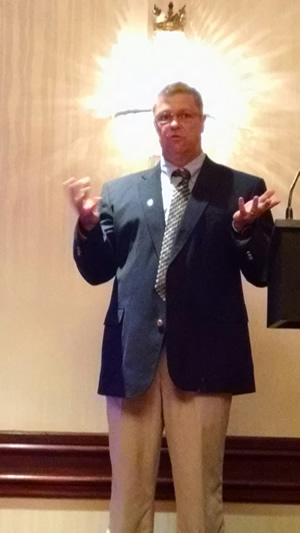 Brian Powers of Nationwide Insurance offered his perspective on the automotive glass industry.

The Auto Glass Safety Council™ (AGSC) held a member meeting in October that covered an audit update, Auto Glass Replacement Safety Standard (AGRSS®) changes, an insurer’s perspective and more. The meeting was held on October 7, just prior to the opening of Auto Glass Week™ in Baltimore.

AGSC president Debra Levy and vice president David Rohlfing opened the meeting. They told attendees that AGSC is in the midst of a four-part strategic plan to:

During the audit and AGRSS Standard update, Penny Ouellette of Orion Registrar Corp., (the group that oversees the third-party audit program) said AGSC Registered Member Companies can expect to be alerted 70 days prior to being audited. Then, 30 days before the visit, she said someone from Orion will be in touch with the shop to give a specific time.

“As long as you prepare, you will be fine,” said Jean Pero, treasurer and chair of the AGSC Credentialing Committee, who has observed a number of audits. “Orion is very fluid and proficient. I was amazed about how easy the process was. Get your urethane suppliers to visit before the audit and maybe do some training.”

AGSC Registered Member companies are expected to train on the updated AGRSS Standard in 2015 and be prepared to be audited in 2016 on it, pointed out both Ouellette and Bob Beranek of Automotive Glass Consultants. Beranek chairs the AGSC Standards Committee and is a member of the AGSC board of directors.

“We are still validating companies on the old [standard] through 2015,” said Pero. “So start training on the new one next year.”

Next, a session titled “Maximizing Your AGSC Membership” was led by Terry Dennis of Auto GlassMasters LLC, Mike Schenian of City Auto Glass, and Troy Mason of Techna Glass.

Dennis stressed the importance of displaying the AGSC logo.

“I took my vans and stripped them down to include AGSC logos,” he said.

Certification also is key. “Every single tech in my company got certified,” said Dennis. “ … I probably feel as good about my business now as I have in 14 years and it’s because of the AGSC.”

Mason discussed professionalism and the role it plays in his business.

“We use the Standard to make our technicians feel like professionals,” he said. “I really try to give my guys any tools they need.”

Education is crucial. “There are still people out there who don’t know what they don’t know … it’s our job to educate them,” said Mason.

As part of this session, attendees received a sample AGSC Registered Member Company phone script to utilize to educate customers and potential customers about the AGSC and the importance of a proper windshield installation. The script is available for download here.

“This script was developed by an AGSC Registered Member Company owner and had an 82 percent close rate,” said Levy.

Jeff Olive, who chairs the AGSC’s Education Committee, also provided an update on the committee’s work. He told attendees that new training materials are being developed for the certification program and that these should be ready for beta testing my November 1 and ready for full use by next year. He also discussed the new types of training now available from AGSC.

Brian Powers of Nationwide Insurance, who recently observed a number of AGSC audits, also spoke. He provided an insurer’s perspective on the auto glass industry.

“The industry has to respond to new equipment coming out,” he said. “Technology is evolving quickly and we have to be ready. We’re going to have to build programs that bring in groups that stand above everyone else. You guys are an example … Glass is important.”

When it comes to recalibrating lane departure systems, Powers said it’s a challenge for insurers and the glass industry. Automotive glass shops should get paid for this, he noted.

“We see this as a rather large problem for us and you … some body shops and dealerships don’t have calibration tools,” he explained. “We are looking at having to put people in a rental because they don’t have the tools to get it done. From a pricing standpoint … how do we set it up so we can bill it correctly and we don’t have to touch it at all? We want it simple from a billing standpoint. How do we handle that to where we’re comfortable?”

“AGSC plans to make the member meeting an annual event,” said Levy. “The feedback has been excellent.”

As a condition of membership, I agree to follow the guidelines listed above on the usage of the AGSC Automotive Casualty Insurance Company Member logo. I do not agree with the guidelines listed above and decline usage of the logos.
Manage Cookie Consent
To provide the best experiences, we use technologies like cookies to store and/or access device information. Consenting to these technologies will allow us to process data such as browsing behavior or unique IDs on this site. Not consenting or withdrawing consent, may adversely affect certain features and functions.
Manage options Manage services Manage vendors Read more about these purposes
View preferences
{title} {title} {title}