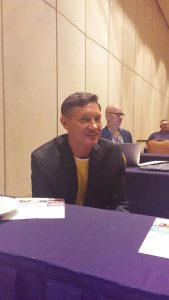 Insurance agent
Jon Franway lost his
sister in a car crash
due to an improperly
installed windshield.
He talked about his
sister and his passion
for auto glass safety.

The Auto Glass Safety Council™ (AGSC) held its annual meeting in early October in San Antonio, just before Auto Glass Week™ got underway. The meeting featured a special appearance by insurance agent Jon Fransway along with several other informative speakers.

Fransway has worked as a safety advocate in the AGRR industry since his sister’s death in 1999 due to an improperly installed windshield. He gave an impassioned plea for safety and introduced the AGSC’s recently debuted video, which provides a history of the AGSC along with a detailed look at why proper windshield installations are crucial. The video also explains the importance of utilizing AGSC Registered Member Companies and offers an overview of the third-party validation program in which companies agree to participate.

“My sister’s death has special meaning to the auto glass industry throughout the country,” said a visibly emotional Fransway. “We want everyone to survive [a] crash. Her death was due to the gross display of a windshield improperly installed in the aftermarket.”

This entry was posted in Insurance Newsletter and tagged insurance newsletter. Bookmark the permalink.