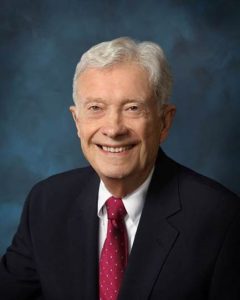 William “Bill” Ives, age 87, died peacefully on May 30, 2020 in North Carolina surrounded by family. Bill had been the AGSC attorney since its founding until 2019 and was instrumental in the development of the organization.

Bill served in the U. S. Army from 1955 to 1957. Although trained as an infantry officer, he joined the US Army’s Counter Intelligence Corps as a Special Agent and a Field Office Commander in Giessen, Germany. He was always proud of his military service and the many lessons he learned from it.

Bill served as the legal attorney for AGSC from its start in 1999 until his retirement in 2019 and was a key figure in its history. He was very proud of the Carl F. Tompkins award (the association’s highest award) that he received in 2013.

“Bill retired from the law firm of Michael Best about ten years ago. At that time AGSC (then known as the AGRSS Committee) still owed the firm a lot of money. Bill bought the receivable from the firm and told us to take our time paying it off. When we finally did seven years ago, Bill brought champagne out for all of us and thus gave our fledging group the chance to grow and take root. He will be greatly missed,” said Mike Schenian, AGSC treasurer.

Bill’s civic involvement included the Executive Committee of the 1992 Chicago World’s Fair, long time board member and President of the International Churchill Center, Board of Governors of the Association of Churchill Fellows at the National Churchill Museum and member of the Illinois State Historical Society’s Advisory Board.

Services and burial were held in his hometown of Aledo, Il on Saturday, June 6, 2020. A Memorial Service will be held in Chapel Hill at a later date. The family suggests donations go to a Food Bank of your choice.

If you wish to send a note to Bill’s wife, she can be reached at ivesvirginia@gmail.com.

In consideration of this license by the AGSC of the limited and conditional right to download and print the ANSI/AGSC/AGRSS™ Standard 003-2015 for personal use, Applicant hereby agrees as follows:

If you have questions regarding the downloading and printing of the ANSI/AGSC/AGRSS™ Standard 003-2015, please contact Kathy Bimber at kbimber@agsc.org.