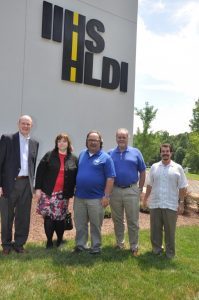 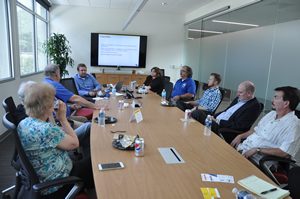 IIHS officials met with the AGSC board and briefed them on a number of ongoing safety studies.

Several Auto Glass Safety Council™ (AGSC) board members spent Wednesday, August 10, touring the Insurance Institute for Highway Safety (IIHS) in Ruckersville, Va., and meeting officials there. The group was briefed on a number of safety studies that are ongoing at the independent, nonprofit organization. IIHS is funded by the major automotive insurers and is dedicated to reducing the losses—deaths, injuries and property damage—from crashes on the nation’s roads.

As a part of the visit, the board saw vehicles in various states of damage and stages of testing. Much of the damage was due to crash testing at the facility; however, a few vehicles on display were from real-world crashes.

This vehicle was damaged by a real- world crash. It is on display at IIHS.

“We were very appreciative of the time and attention we received from IIHS during our visit,” said Levy. “We will have a full briefing for the membership at the member meeting on October 4 in San Antonio.”

The AGSC will hold its annual member meeting on Tuesday morning, October 4, at the San Antonio Marriott Rivercenter.